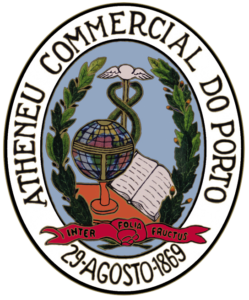 The Ateneu Comercial do Porto, Association of Culture, Instruction and Recreation, was founded on August 29, 1869 and resulted from the merger of other similar institutions that did not succeed, founded by merchants and clerks from the city of Porto.

By motto, he chose “Inter Folia Fructus”, which portrays his purpose of “… promoting and cementing benevolence and good society relations among the associates and providing them with an honest and civilizing pastime through ordinary meetings, dancing and reading, conversation and lawful game”.

Unique association of its kind, with the nature of a private club, where recreational and cultural activities coexist, it has its headquarters in its own building, at Rua de Passos Manuel, n.º 44, since May 1885. Equipped with magnificent facilities, it has a noble, multipurpose room, library, buffet, bar, barbershop, living room, games rooms, billiard rooms and reading room, in addition to the D. Luís and Dr. Uva.

From its origins as a recreational society, to the extravagances of a bourgeois club, not forgetting the tradition of balls, soirees and gatherings, where it always had the presence of the old and new aristocracy, it never ceased to identify itself with Porto and its movements. civic and cultural.

Its peculiar identity allowed it to welcome all elites, of different sensitivities, powers and counter-powers, never assuming connotations marked with any group, thus surviving the vicissitudes of the unfolding of history. Surely, this is its greatest heritage, that is, a culture of plurality, tolerance and independence, in the face of any political or religious creed, a stance that it continues to cultivate, counting among its members with influential names from all quarters and trends. ideological.

The history of this Institution is very rich and perhaps tedious for those who consult this page, to list the national and international events held over more than 151 years of life – during which it has always invited and opened its doors to the citizens of Porto – and where figures of great national and international prestige have passed, in the field of letters, plastic and performing arts, music, politics and science.

Not underestimating its valuable artistic heritage in oil paintings, sculpture and faience, as well as collections of a numismatic and medalistic nature, its “crown jewel” is the Library, considered one of the best private libraries in the Iberian Peninsula. Its bibliographic content is of great value, with a collection of more than 40,000 titles and 80,000 volumes, highlighting, among many rarities, a first edition of “Os Lusíadas”, an edition of the Bible dated 1500 and some writings by Fernão Lopes.

Praise from the Portuguese Government

Commander of the Order of Instruction and Benemerence

Grand Officer of the Military Order of Christ

Medal of Merit (Gold) of the City of Porto

Honorary Member of the Order of Infante D. Henrique

Medal of Merit (Gold) of the City of Porto